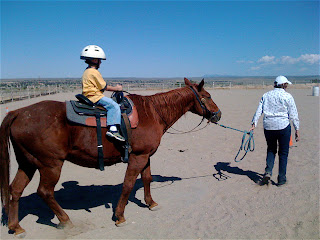 We had the opportunity to go to Galloping Grace Youth Ranch on Friday. It was such a wonderful experience for the kids and I. I was so amazed at how the kids pitched in and helped scoop poop without complaining, and how much they enjoyed the horses! I was especially amazed at how quickly my middle guy took to the horses.

We have been going through a really rough spell over the last couple of months with C. I think the transition to "kindergartner" is proving a tough one for him. Even though we homeschool, a lot of things have been changing. He's in a new class at church. We've been going to a new church with some homeschool friends and he really liked the 4 year old class. So, when the time came to switch, he had a hard time. For about 3 weeks, we dealt with BIG feelings about the new class. He started asking to stay at home instead of go with us to some activities that normally weren't a problem. We have had a couple of big temper tantrums recently. I was really struggling. So much so, that I even asked the pediatrician at his well check a couple of weeks ago if we were maybe dealing with something more than personality. Thankfully, we both agreed that this was just a tough time for him - my introverted, physical, has-a-hard-time-with-verbal-communication kid.

That is why Friday was so amazing. My little guy that struggles with new people and is fearful of most new situations was one of the first ones on a horse. He has never talked about liking horses or cowboys before. We really hadn't read any books or watched any shows about riding horses. This was all new to him. An incredible volunteer, Nancy, took him under her wing and had him helping to saddle up a horse. She helped him lead the horse to the arena. She treated him with so much respect and kindness. By the end of our time there, the wonderful folks at Galloping Grace even had him riding a bit by himself. As my husband said on the phone, "Our C? Really? He rode a horse?"

C is hooked. Right away he asked if he could have a cowboy hat like Mr. Max. On the phone this weekend he told his Aunt Judy (a horse lover) that he was going to be a cowboy for Halloween and Christmas. (I didn't know you were supposed to dress up for Christmas ;) ) He said he wants a "horse-riding" birthday party. (It's not until next year.) He dug a pair of old cowboy boots out of the closet that Aunt Judy had given B a long time ago. He said that when he grows up, he wants to ride horses in a race. I have never seen him this excited about anything before. 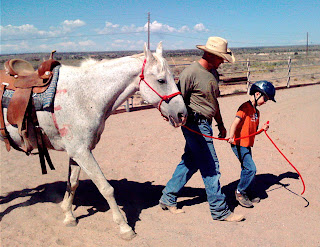 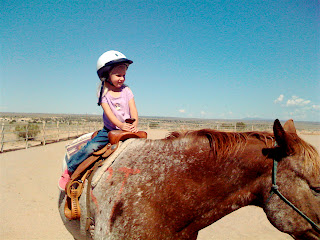 B and A did really great too. B (since I know you'll read this ;) ) was so incredibly patient. He waited for his turn to ride without complaining. And A got right up on that horse like she'd done it before. She is so proud of how she balanced on the horse. What an amazing time! I'm so proud of all my kids!
Posted by Cari at 8:16 AM

What a beautiful post! Thank you so much for sharing it with us. Your C is the reason we do this!!

Awesome! I am so glad the kids enjoyed it so much! What a fabulous place!

Tell C he is turning into quiet th cowboy and we can't wait to have him out again.