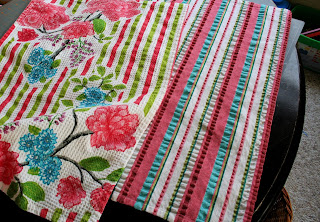 We've had a ton of birthday party invites over the last month or so. This week alone, we have 4 different kid's birthdays. We're also on a really tight budget right now. (Can you call it a budget when there's no income?) ;) So, I've had to get creative with gift giving. I like to make handmade gifts anyway, so it's actually been kind of fun. I've made aprons from tea towels before for gifts. They are super simple and fun to make. I'm always on the lookout for inexpensive and cute tea towels to use. These two towels I found at Target on clearance and stashed them away a couple of months ago. I pulled them out this week to make an apron for a friend of my daughter who was turning 4 years old this week. 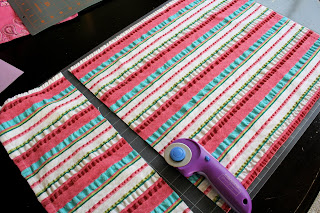 I used these instructions as my starting point. I cut off the bottom section, 17 to 18 inches from the top. In the past, I've just turned that shorter section around and used it for a pocket. But, this time I wanted to use the coordinating dishtowel as the pocket so I set it aside to use for something else. 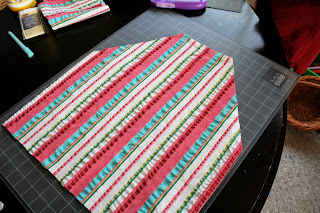 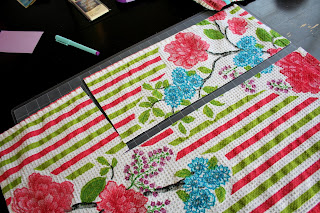 Next, I cut out the pocket from the second towel. I wanted to use the pattern with the stripes going in the opposite direction so I had to measure out what I needed (plus some extra for the seam on one side) and cut that out. I actually forgot about the seam when I cut it out. Thankfully, I was pretty sloppy and had enough. 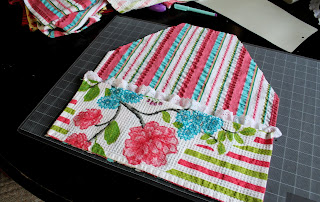 I added some lace trim along the edge of the pocket when I finished that edge. Then I sewed the two sides of the pocked to the apron. Then I measured 4 inches in on both sides and marked the towel. I sewed along my markings to divide the big pocket into three smaller pockets. 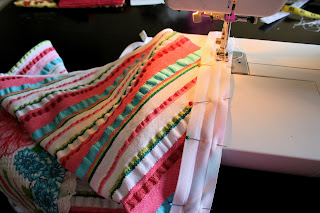 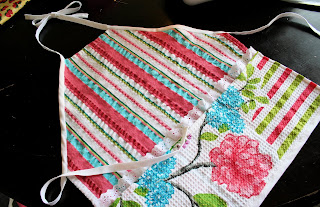 Voila! Finished Apron! I think it turned out pretty darn cute and for less than $5. I threw in a small whisk and spatula to complete the gift.
Posted by Cari at 5:42 PM

Oh, wow, Cari! This is SO stinkin' cute! I love the colors & patterns!

You are so talented! This is simply fabulous! What little girl wouldn't LOVE this?? Oh and I adore your blog makeover;)

Cari, you're totally awesome! Seriously, that "little girl" loves it! Believe it or not, she'd been talking for months about getting an apron and for some reason I just never got her one. But she LOVES the one you made! The best gifts come from the heart :)

Cari, you're momm just gave me you're blog address (my first to visit)what a wonderful page! not only you're intelligence comes through but also you're creative siide shines . i'll be visiting again. lots of love & miss you, aunt Rhonda

I love the apron! Makes me wish I had a sewing machine :)