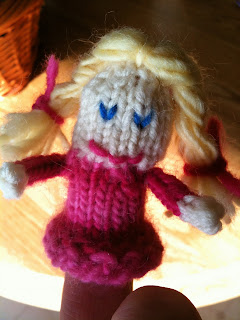 A couple of weeks ago, a friend of mine asked if I could knit her a Goldilocks finger puppet. She had a bunch of knit animal puppets that included bears, but wanted a Goldilocks to go with them. We found this free pattern for a farmer, and I thought that it wouldn't be too hard to turn Old MacDonald into Goldilocks.
I didn't have to make very many changes. First instead of 15 stitches, I cast on 30 stitches and used a very girly pink yarn (Lamb's Pride Worsted Strawberry Smoothie.) Then for the second row, I knit 2 together across the entire row. I was trying to make a little bit of a ruffle to look like a skirt. Then I forgot to switch to stockinette and continued with garter stitch for the next 2 rows. Uh oh. But, it ended up making a nice edge for the skirt. After that, I switched to stockinette and followed the pattern for the increases and decreases. I didn't have to switch yarn color to make overalls, so that ended up being easier. I followed the pattern for the arms and face, but gave her yellow braids instead of farmer hair. I think she came out pretty darn cute!
ETA: So, my sweet husband told me that she reminded him of the Joker. What?! It was bugging me that her hair was too far back on her head anyway, so I went ahead and added some more hair to her head. I think (hopefully) that she looks less like the Joker and more like Goldilocks now. I posted a new photo with her new hairdo.
Posted by Cari at 5:26 PM

I love it! she is so pretty

Just something you whipped up, huh?!! Great work.