We've been so incredibly busy over the last couple of weeks! I had every intention of starting our new term for homeschool at the beginning of September. Well, it looks like we're going to have to start next week. We've been doing some book work, but it's been mostly math and reading practice as well as finishing up a couple of books from last term. But, we've been busy doing some pretty cool things. I thought I'd post a couple of pictures that I hadn't had a chance to post yet. 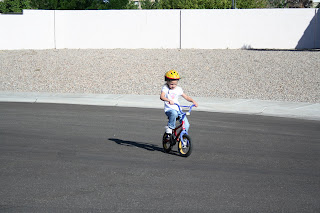 First, I can't believe that I haven't posted about this huge event in our family! We no longer have anyone using training wheels! My daughter decided that it was time (at barely 4 1/2 years old) to get rid of those pesky training wheels. And when she decides to do something, nothing is going to stand in her way. She spent quite a bit of the day figuring out how to ride. It was a little rough in the beginning. I think she expected it to be a bit easier than it was. She didn't want any help. In fact, she told us to leave her alone so she could do it herself. But, by the end of the day, she was sailing done the hill into our cul-de-sac like a pro. 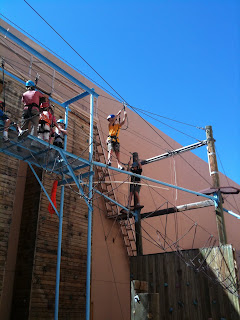 Yikes! Boog is waaayy up high! He's in the yellow t-shirt. He was so thrilled to get to join our Roots & Shoots group while they tackled the high ropes course at UNM. It's not the typical activity for our group. Normally, they stick to service projects, but this was a special opportunity for the kids to work on teamwork and to build confidence in themselves. 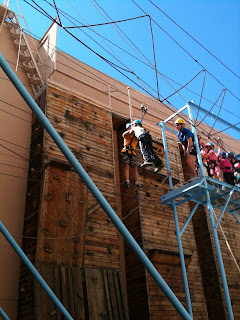 Boog said this was the most difficult part of the course. The two kids had to balance by leaning against each other and working together to move across the ropes. There were a few shrieks and some yells from mom to keep breathing, but they made it. I was so proud of all of the kids (and the moms) who did the course. It was a real accomplishment. I loved seeing the smiles as they came off the course. It didn't matter if they did every challenge or not. They all pushed themselves farther than they thought they would be able to go. It was really inspiring. 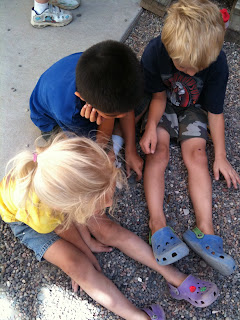 And here's what my other two kids did while they were waiting for their big brother. They were just a little too young to go on the course, so they occupied themselves by playing in the rocks with the other too-young siblings.
Posted by Cari at 8:40 PM

Those are some very impressive accomplishments!