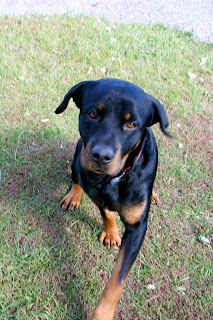 This sweet boy joined our family last Saturday. He's a 1 1/2 year old Rottweiler. Our two Rotties that we loved so much and raised from puppyhood passed away about 4 years ago. My husband and kids have been yearning to get another dog. I mean I was getting major pressure from all of them! The circumstances just weren't right yet. After Brad started his new job, the discussions started again. We weren't sure what we were going to do. We knew we wanted another Rott, but thought that we would go with a pup from a reputable breeder. After emailing the local Rottie AKC club, we found out that there probably wouldn't be any pups in the area for some time. In the midst of emailing back and forth, the idea of going through a Rottie rescue organization came up. After the first attempt at a rescue adoption fell through, I thought that we weren't going to pursue the issue for awhile. I didn't know that my hubby was searching all of the shelters in not only New Mexico but Colorado as well. 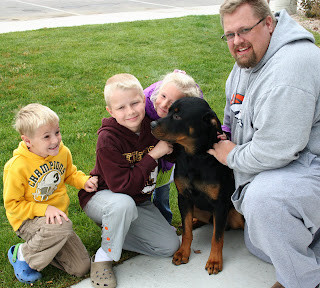 He found this boy up in a shelter in Colorado. He asked his aunt to go take a look at him and let him know what she thought. She called us last Friday from the shelter and told us she thought he would be a great dog for our family. I still wasn't on board. It seemed crazy to me to drive 4 hours each way to adopt a dog. But then she said that he reminded her of Zeb, one of our previous Rotts that I loved so much. Totally unfair, right? So on Saturday we all hopped in the car and drove up to meet him. When we got there, he was getting a bath, because the staff knew we were coming up. They let Brad go in the back and see how well he tolerated being washed up. The rest of us waited in anticipation to meet him. We all fell instantly in love with him. He went to each of the kids and nuzzled and kissed them. Then he came over and tried to climb in my lap. He was coming home with us. 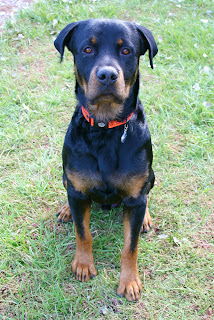 We decided to keep his name and not change it. We're mostly calling him "Max." He needs to gain about 20 lbs, but other than that seems pretty healthy. He has such a calm and loving personality. Well, except around the cat. We're having to work on that. He loves to have his belly rubbed and gives us the cutest puppy grins when we get home from being out and about. The best part is that he loves all the hugs and kisses from the kids. We love being his new pack and it feels really good to give him a second chance at a good life! 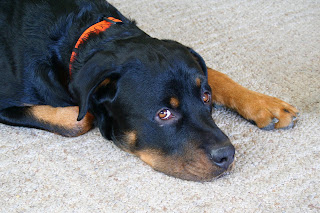 He's a handsome puppy with a great name. :)