My sister came to visit from California for the weekend and we had so much fun! (Well, except for the saying goodbye part when she left Sunday evening.) Saturday was filled with carting kids to activities. Try as we might, we couldn't figure out a way to see both ballet class and Boog's flag football since they were at the exact same time. That was kind of a bummer. And I missed Boog's first catch during a game. But, he was very gracious about it. That afternoon, my sister and I went to the Balloon Glow at the Albuquerque International Balloon Fiesta. We got there early and walked around the vendors. We watched as the gas balloons prepared for takeoff for the gas balloon race. Then, we got the disappointing news that the balloon events would be canceled for the evening because of wind. So, instead we went out for dinner and catching up which wasn't probably as cool as glowing balloons but still a treat. 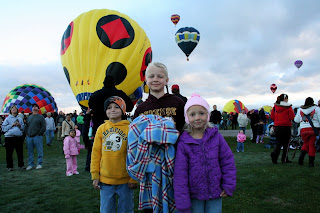 The next morning we all got up really early for Mass Ascension at the Balloon Fiesta - all except for my husband who is not nearly so excited about hot air balloons as I am. We weren't sure if the weather would be ok. It wasn't great, lots of dark clouds, but a good number of balloons still launched. Here the kids are still looking a bit sleepy. 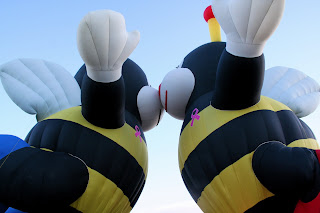 These two kissing bees are two of my favorites. Unfortunately, they didn't actually lift off because of the weather, but they still inflated them for all of us there. 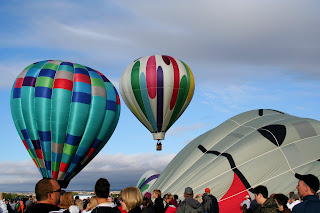 The dead cat balloon (one of my kids favorites) also didn't launch. Here it is just after it deflated. 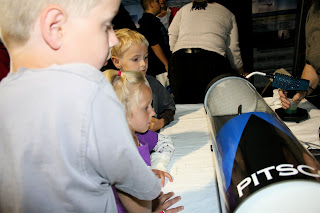 In the kid's area, NASA had a tent full of all kinds of neat stuff. Before, we headed home, we took the kids there to see it. There were lots of fun posters that they got to take home, a small wind tunnel (that's what the kids are looking at here), a cockpit the kids could climb into and a station where they took the kids' pictures and superimposed them in space suits for them. They came in a "passport" with lots of fun activities.
Our only really big disappointment was that once again we missed the Darth Vader balloon. It's become almost comical. My kids are huge Star Wars fans and they have been wanting to see the Darth Vader balloon up close. The first year we went to Balloon Fiesta, the Darth Vader balloon had caught on fire earlier in the week and had to go home. Then last year, we missed it because the weekend we planned on going ended up being rained out. And this year....the Darth Vader balloon is stuck in China. According to the news today, I saw that it is supposed to be officially out of China, but still not here yet. So, I've promised the boys that if it gets here and is at the Balloon Fiesta, we will try to go again later in the week. So keep your fingers crossed for me. I don't think I could bear another year of complaining that they still haven't seen the Darth Vader balloon! ;)
Posted by Cari at 2:24 PM

Aw, man, of all the balloons to be stuck in CHINA!!!! :( Looks like you all had lots of fun! Looking forward to seeing you all this week :)