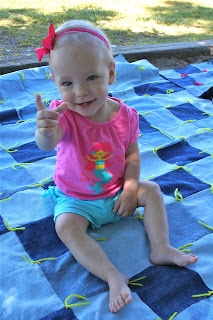 I'm ONE!
Our littlest one turned ONE! So hard to believe that a year has passed since her birth. I have been looking forward to this birthday all year! I knew that when it came, we would hopefully be past the hardest struggles of having a preemie. And we are! She is still slightly delayed in her gross motor development, but has come such a long way! She is crawling and pulling up now and all the weight issues of her first several months are a thing of the past. She's still a petite little thing, but not far off from where her sister was at the same age. 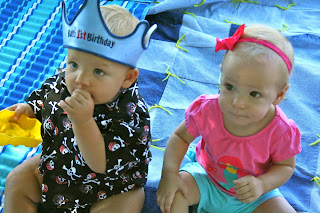 To celebrate her birthday, we had a joint celebration with a very good friend of mine whose son also turned one in July. The first pictures of them together are so funny. I think we took them at around 6 weeks old and Baby V looks like his doll. Now she's still smaller, but the difference isn't quite so dramatic. 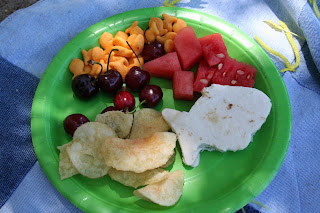 It was fun throwing a birthday party with a friend. It meant that I didn't have to do all the work. LOL She handled all the food and I did the cakes and favors. We chose the theme "sea creatures." I thought it would be a fun summertime theme and perfect for a birthday party celebrating both a little girl's and boy's first birthday. My friend made yummy cream cheese and turkey or ham on tortilla sandwiches cut in the shape of fish. My husband has asked me to make these at home (minus the fish cookie cutter.) ;) Of course, we had to have goldfish crackers too. Along with that some fruit, chips for the grown ups and flavored lemonade. We had the party at a park so we tried to keep everything finger foods. 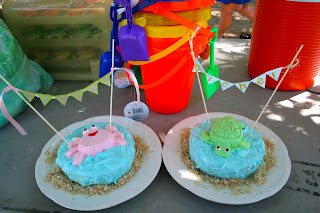 I made the cakes and cupcakes. I used this tutorial on Hungry Happenings to make marshmallow sea creatures from the sand toys I bought to give as favors. These went onto two different 6 inch round cakes frosted blue like the sea. I made vanilla wafer crumbs to resemble sand and sprinkled it around the base of the cakes. My dear friend Tina, card-maker extraordinaire, made two mini pennants with each baby's name for the top of the cakes. I think they came out pretty cute if I do say so myself. 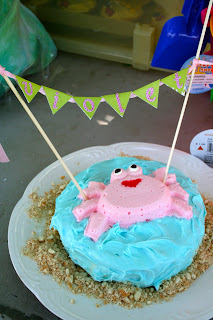 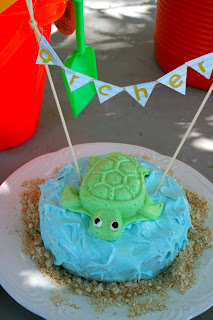 I didn't get a good picture of the cupcakes I made for everyone else. I used these instructions on Family Fun's website. Super easy and cute! I made not only orange but also blue, yellow and green fishies. 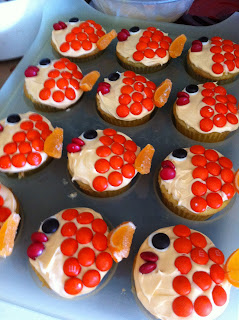 We kept the party really low-key. We had sand pails and sand toys for the kids. I also set up a baby pool with sea creature squirters in it. Overall, it was a fun party to put together. We kept the guest list small which made it manageable, but I wished that I could have invited all the families who have been such a help to us this past year! 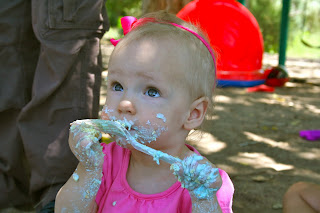 I <3 that picture of her with all of the frosting. It looks like a great time!

Your birthday cakes turned out so cute. I'm so happy you liked my tutorial at Hungry Happenings and would like to post a picture or two of your cakes on my site, if that is O.K. with you. I love the turtle mold and the marshmallow had such detail, it looked great.

Absolutely! I'm honored that you'd like to use the pics! :) The turtle is my favorite. If I'd had time, I think I would have redone the crab and made it a little darker color.