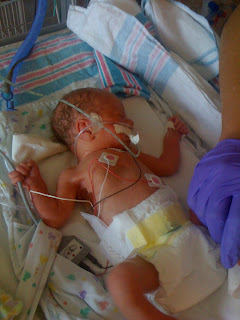 Our sweet baby - 2 days old
It's so hard to believe that this was a year ago! In some ways it seems like a very long time ago and in other ways not long at all. I was only in the hospital 6 days when I was rudely woken up in the middle of the night to be told that my liver function numbers were not looking good and that I would need to have a c-section first thing in the morning. That was a really horrific night. I sobbed to myself for hours. I wanted so badly to call my hubby. He is my biggest comfort. But, I knew that if we were having this baby 9 weeks early, he would need the sleep. So I just cried to myself in the dark in my hospital room. I called him at 6 am. He made it to the hospital by 7. At around 7:30 my OB/GYN called me to find out what was going on. She said she'd stop by on the way to her office to check on everything. She told me that I still had a say in whether or not I wanted a c-section right now. Even though my situation gave me very little choice, she always made me feel like I had a say in my care. I seriously lucked out having her as my doctor. Then my favorite hospital doctor came to my room. He explained that my levels were not looking good, but if they didn't get any worse, he didn't think that I needed to rush into a c-section. Yay!!

I decided to eat breakfast and wait it out through another round of blood tests. I still was feeling good and not having any of the scary symptoms of pre-eclampsia (well except for extremely high blood pressure.) My good friend stopped by to chat. Everything seemed fine. I told her I was going to try to hold out for another day or so. It seemed completely doable. 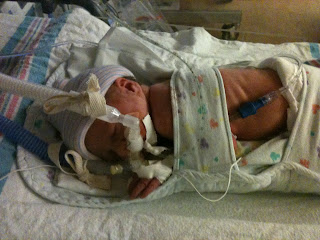 This is the picture my husband took so I could see our little girl for the first time
Here is when I tell you that all the crazy precautions that I hated (like being in the hospital) probably saved my life. Right after my friend left, I started to have incredibly intense right upper quadrant pain. Pain right under the right side of my ribcage. It came on so suddenly that it took me by surprise. I had what is called HELLP syndrome. My liver decided that it wanted to stop working. It was so painful that I even asked for pain meds. I was rushed over to the labor and delivery side of the hospital so they could start prepping for an emergency c-section. My doctor was called and she rearranged her afternoon schedule to come over to the hospital and do my surgery. My favorite hospital doctor was there too. Within two hours everyone was there and ready for surgery. The c-section was not a big deal. I'd had three others so I knew what to expect. My doctor told me that I could have had a vbac for sure after she did the incision and saw that the scar tissue from the previous c-sections wasn't bad at all. Well, if I hadn't had pre-eclampsia and HELLP. I know I should have felt vindicated a little for fighting for a vbac, but since I was in the middle of another c-section, it just made me feel sad.

Having a baby this early meant that I didn't get to even see her before she was whisked away to the NICU doctors. I heard her cry. That was it. Gah, it's making me cry thinking about it. Then I was taken to the recovery room. The NICU doctor came in to tell me that my baby was doing really well. She said that she was more worried about me than she was about my daughter. I guess I didn't look so great. They tried to wheel me past her bed in the NICU before taking me back to my hospital room. They were in the process of trying to get her IV in and it wasn't going well, so I still didn't get a glimpse of her. I was told that she weighed 3 lbs 13 oz and was 17.5 inches long. But I didn't get to see her much less touch her and tell her how much I loved her already.

Back in my hospital room, I couldn't move. I was put on magnesium sulfate which is standard procedure for anyone with pre-eclampsia. Let me tell you - that stuff is nasty. I was doing ok at first and then I started to feel worse and worse. I have recovered from a c-section before and while it's no fun, it was nothing like this. I had started pumping to try to get my milk to come in, but I couldn't do it anymore. That's how bad I felt. I was throwing up. I think it was a reaction to the pain meds. I even told the nurses that I didn't want anyone but my husband in my room. It was a miserable 24 hours.

24 hours after her birth, I was taken off the mag and wheeled over to the NICU. I got to hold my precious itty-bitty baby for the first time. I cried and cried. I cried because she looked so helpless with all those cords attached to her. I cried because she had spent her first 24 hours in this world (2 months before she was supposed to) away from her mama. (For the record, she did have her daddy.) And I cried because the whole thing was just so disappointing to me. Yes, I was thankful that she was doing so well for being so early, but it was still stressful and scary. I had wanted so much more for her and for me.
Posted by Cari at 9:19 PM

You have me bawling first thing in the morning, Cari. It's so hard to believe that was V. I showed B the pictures & she had no idea. I marvel at the miracle of her progress & the year you all have had.

Hi Cari -
It's wonderful for you to share these frightful moments so that it might not be as frightful (if that's at all possible) for others going through similar battles. No one's ever alone through these trials - though I'm sure it feels like it.

BTW, I was a 3 pound 6 ounce preemie over 50 years ago and all's well with me. My Mom fought the doctors when they said I wouldn't make it... Got a new one, and the rest is history!