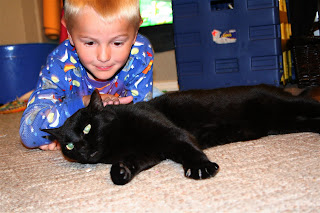 Normally our cat is quite the anti-social animal. He has no patience for the kids and spends most of the day in hiding. The only time he comes out is during a storm. He hates storms and looks for the closest human to sit by during the storm - no holding and cuddling, just close proximity. We had a crazy storm this afternoon complete with hail, wind, thunder and lightning. He was next to my feet for most of it. Once the storm was over, he went back to his hiding spot.

I was really surprised to see him out this evening trying to be social. He walked up to C and laid down next to him. He allowed C to pet him. I think C was pretty surprised, too. I had to get a picture since none of my friends even believe we have a cat. Also, I wanted to prove that he's not that bad. ;) 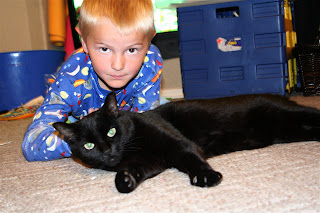 Don't they both look like they have the same slightly irritated expression? How sad that this was the exciting moment of my day. We missed the Balloon Fiesta. I was so disappointed. They ended up canceling all of today's events because of bad weather. It was probably a good thing since my 3 yo is sick and I might have been tempted to take her out this morning if the weather had been nice. B did get to play his soccer game. It was really windy but it was before the rain and lightning. The rain started coming down just as we were leaving. C's soccer game was canceled. (We were secretly relieved.) Hopefully A will be feeling a bit better tomorrow. We already had to bow out of a birthday party tomorrow. Don't want to spread germs, especially to friends. Maybe I can get some much needed housework done tomorrow. Or get started on a few books I have laying around here waiting to be read.
Posted by Cari at 9:27 PM

Wow, you are right, I always forget you have a cat. Our last cat was like that. This one? Mr. Social, whether you like it or not.
I hope A is better by tomorrow:)

The cat is beautiful. I'm allergic so we'll never have one indoors. We think about getting one for GG once we live out there. Don't all ranches need a good barn cat?