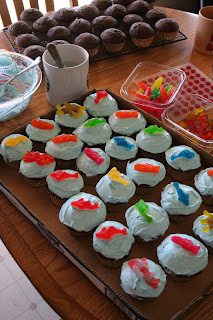 Earlier this week, my oldest had his 8th Birthday! I cannot believe that he is 8 years old. We celebrated his birthday at one of the city's indoor pools. I felt like the cupcakes I made were uninspired this year, but the kids loved them. We tried to stick to a pool/water theme. I just frosted them blue and stuck little gummy sea creatures on them. B invited a bunch of friends from our playgroup, homeschool group and his soccer team. It really is unbelievable how much energy 7 and 8 year old boys have! They got to go down the really cool slide and have squirt gun fights in the pool. 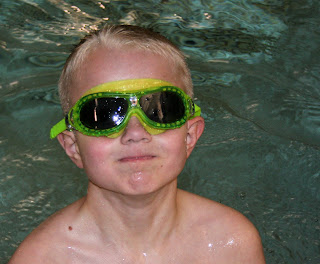 B had received some money from his Colorado grandparents for his birthday gift. He asked if we could stop by Big 5 on the way to the pool to buy some nice goggles. He had some inexpensive ones that he'd been frustrated with during his swim lessons. The new ones are pretty cool! He received so many wonderful gifts from his friends - lots of Lego sets. Although we've been so busy this week that he hasn't had a chance to really sit down and work on them. He was even asking me when we could leave the park today so he could come home. That doesn't happen very often! He also got a new chess set and Star Wars monopoly. I think I know what the family will be doing this weekend!
Posted by Cari at 7:36 PM

Oh course they were inspired! By the theme of the party. They are/were adorable. Glad he/they/you had a good time. That is what parties are all about. But I do remember that feeling... like you have to at least keep up with what you did last year... or for the others... but you don't, you know. Only with the love. LOIS

Anonymous said...
This comment has been removed by a blog administrator.
12:00 AM

Happy late Birthday, B! Looks like your party was super fun.