I haven't done much in the way of craft projects lately. But, here are a couple of projects that I worked on last month. Now that my computer is back and working better than ever (Yay!!), I wanted to post some pictures. 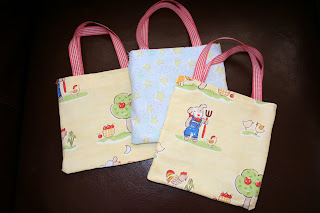 These little bags were a super quick last-minute idea. And by super quick, I mean that an hour before a joint first birthday party for three cute 1 year olds, I decided to throw them together. I found the material on the clearance rack at JoAnn's awhile ago. I bought it not having any ideas on how to use it. I cut out 7"x7" squares (roughly) and sewed the outsides together. Then using the star material, sewed the linings together. Put the insides and outsides together, added some ribbon for a handle and had three cute little bags. I even had time to run by Borders for three little farm animal board books to throw in the bags. They definitely weren't perfect, but came out pretty cute for a last-minute idea. 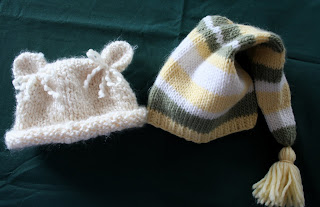 I knit these two baby hats for my friend Cindy who is a photographer. She's been trying to boost her newborn photo sessions and wanted some hats in her kit. (By the way, she's still looking for newborns to photograph and will give anyone with a newborn an incredible deal!!) Both hats were inspired by the book Baby Beanies by Amanda Keeys. The little white hat is knit from some inexpensive acrylic yarn. The striped hat is done with Lamb's Pride worsted wool yarn. Instead of following the stripe pattern in the book, I used this stripe generator to make the pattern. That tool was so helpful! You'd think that making random stripes would be really easy. But, it was so nice to look at the different patterns to see whether I would like it or not before starting.
It's raining here in New Mexico, so I think I'll make myself another cup of tea. Today would be a great day to knit. Hmmm, maybe I should start a new project.
Posted by Cari at 3:35 PM

So cute, Cari!!! Etsy, etsy, etsy!!! We might actually be moving to Albuquerque in the fall. :P I'll let you know more when I can. (psst...I'm really stoked!)

Thanks for the plug, Cari! Yep, send me those newborns:)

Love the hats too!

Mr baby loves his little bag. He hides food in it - lol!