Since October, my kids have gotten together with a group of homeschool kids once a week to create and rehearse their very own opera. It's a program sponsored by the Santa Fe Opera. They match up a group of kids with two artists-in-residence to create an original work. Here's a press release about the 2009 student produced operas. We were so privileged to be a part of the program this year. Our artists-in-residence were incredible! The husband/wife team that led our group really brought out the best in all our kids!

The theme for this year was "life by the river." All the groups were to start with that theme for inspiration and then create their own story. I believe that all of the other groups were based in schools. We were really lucky to have a group for homeschoolers so close. The kids, through brainstorming exercises ended up with Slugs on Mars. (Yes, all of our kids have great imaginations!) 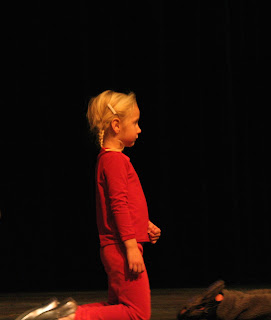 Here's the basic storyline. Slugs and snakes are happily living by a lake looking for food. (My youngest was one of the snakes. Isn't she cute!!) Aliens swoop down from Mars and suck them into their spaceship. Once back on Mars, the Aliens suck the slime out of them for slug and snake shakes and have a big party. The poor slugs and snakes cry for help. Many of the aliens feel badly for what they have done and seek the help of Mr. Sand. 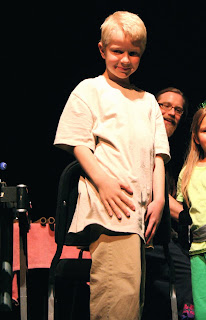 B was Mr. Sand. The aliens ask him a bunch of questions like "Do you have purple underwear?" That one got quite a laugh from the audience. Then they ask if he can help. He gives them magic water that creates a river to heal the snakes and slugs and take them back to Earth. 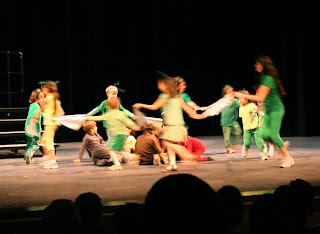 Once back on Earth, the slugs and snakes think they're safe. But, the aliens come back looking for them. The aliens can't find the slugs and snakes so they go to Mr. Sand to ask him. Mr. Sand won't talk, so they say "You're fired!" Mr. Sand says "Maybe." And the slugs and snakes peek out from their hiding place and sing, "Maybe not today!!!!" The End!
They did such an incredible job! At the very last moment, my daughter decided she couldn't go on stage. The performance was held in a really large performance hall. It probably sat a couple of hundred?? There were three groups performing their operas on the same night, so it was really full, too. I ran her back to our seats. Once we were seated and the show was about to begin, she started wailing that she wanted to be with her brother. She wanted to be in the show. So, I jumped up and ran her back just in time for her entrance. Once she was on stage, she did great! C chose to sit this activity out. He felt like he would be best suited for the audience. ;) And he was a great supporter. He knew all the songs, but performing just wasn't his idea of a good time. In addition to being Mr. Sand, B also got to add to the music with some sound effects before his part on stage. He worked something that made a ratchet sound effect and something that made a great alien "wocka wocka" sound. It was such a wonderful night and great experience. I love that they saw the creative process through from the very beginning to the end. On the ride home, B was already asking if we can do it again next year!