Gosh, this summer is flying by! We have been so busy even with nothing special planned. We've been busy meeting friends at parks, the pool and for fun day trips. This past Saturday some of my friends and I took our kids up to Santa Fe for the day. 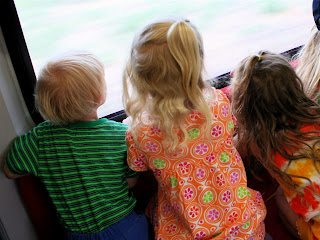 We decided to take the kids on the Railrunner, our commuter train. Here are a few of them watching out the window on our way up to Santa Fe. It was 4 moms with 9 children 8 years old and younger. I think everyone near us on the train thought we were a bit crazy. Haha, maybe we were. The train ride would have been wonderful except that I found out that I haven't outgrown the motion sickness I had as a kid. Man, I was feeling pretty blech. But, I made it. I think it will be awhile before I willingly take a train again. 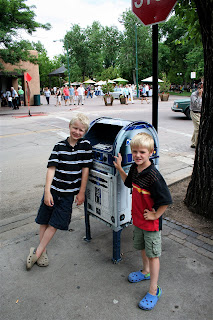 Once there, we walked to a restaurant for lunch. We ate at the Cowgirl BBQ. It was delicious, the kids all liked it and the Mangorita (a mango margarita concoction) I had with lunch hit the spot. We even were complimented on how well-behaved our kids were. After lunch, we walked to the new New Mexico History Museum. My friend scored some free tickets and was so generous to share with us. I thought the museum was well done, but not very kid-friendly. There weren't any hands-on areas for the kids which was really too bad. I think it's somewhere we will have to go back to during the week when it isn't so crowded to explore some more. The thing my boys were most excited about was the R2D2 mailbox there on the plaza. They remembered it from when we went to the Art Museum a year or so ago. They had to have their picture taken with it. Such goofballs!
Posted by Cari at 5:41 PM

Sounds like a fun trip. We never saw the mailbox when we were there, I think because it was freezing and snowing.

That mangorita sounds awesome!!! Truly- I have been on a mango kick lately.

Good times! You could almost make me want to load mine up and go for it. . . almost! :)