This week was pretty low-key. We kept up our studies with Lesson Pathways. I'm still trying to get into a good rhythm with homeschooling, but we're not quite there yet. We have made progress though. I saw an idea on funschooling that I thought might work for us. She uses a private blog to record assignments for the day. We tried that this week and it really seemed to work well. It was easy to fill in each morning, and I just edited the previous day to reflect what actually got done. We will continue with this for this next week and hopefully it will continue to work for us.

Here are some highlights from this week. Boog has been reviewing multiplication facts. We've never played Timez Attack before although I've seen it mentioned on other homeschooling sites in the past. It's been great for multiplication practice. He also built a mini solar cooker out of a Pringles chip can. He cooked himself a hot dog that tasted pretty good (he said.) It did take about 2 1/2 hours though. 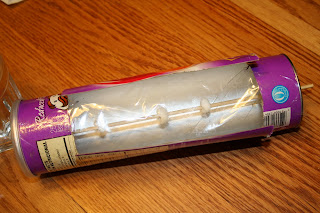 Here it is with marshmallows. Why? I have no idea. I forgot to get a pic of it in action.
Roni read Mercy Watson to the Rescue this week and wrote his own animal story. It's the first time he's ever tried any kind of creative writing. He's my "facts only" kid. At the library, we can usually find him in the non-fiction section. This was a stretch for him. It's short but cute!

One day a cat named Elwood and his brother named Jack lived in New York. They had a problem. RATS!!! They had to think fast or the rats would take over the world. Jack had an idea. He thought about using rat repellant, but Elwood had another idea. He wanted to scare the rats away. The brothers agreed to use both ideas. First they scared the rats. Then they used rat repellant. And it worked! Then they lived happily ever after.

He also studied the Indus River Valley civilization. Is it ok to admit that I don't remember anything about this civilization? I feel a bit embarrassed. I think I enjoyed learning the history as much as he did. He even made some cool mandala art and Pixie got in on that project too.

Pixie and I read lots of books this week. She had gotten a bit behind her brothers on the library reading program so we went to town on a bunch of books this week. One of our favorite books from the library was Fairy Houses. We made plans to build our own fairy house very soon. We thought it might be fun to build one down by the river so we need to plan a day to go down there. She also practiced writing her numbers. She is very businesslike about her schoolwork. It's pretty fun to watch. She's definitely the one I have to break my no-worksheets rule for. She loves them.

I love the idea of a private blog. I am going to be printing out their schedules each week using HST+ because I want them to learn some accountability and give them some independence with doing their work (well, when I say "they" I mostly mean Grant LOL).

I just looked over Lesson Pathways... looks very interesting. I like free! Is it very parent intensive- do you have to do lots of lesson planning and preparing? I'm seriously considering it. We are changing curriculum anyway. It only goes to 5th so I would still have to buy Grant's but I might give this a try over the summer to see if it would work for us.

SO glad to see you getting back into the swing of things! <3